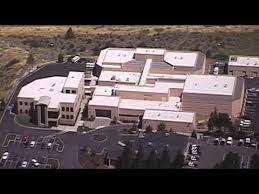 In 2017 AEU technicians retrofitted the complete security electronic system at the Klamath County Jail. Originally installed in 1989, the existing DOS based touch screen system had critically failed. AEU mobilized and had a temporary system in place while the retrofit was on going. The new system was installed in 4 months utilizing state of he art technology. A new PLC control system with digital video cameras will serve the jail in the years to come.